On Friday, December 3, 2021  Robert Rose and I release our 300th episode of the This Old Marketing podcast. We launched on November 20, 2013, taking only a short hiatus during my 2018 sabbatical.

You can get access here (make sure you subscribe). It was a super fun episode that included a surprise introduction.

Are you spending more for food, household goods, travel? Well, you are not alone.

The US Labor Department published the Consumer Price Index a few weeks ago and said inflation was up 6.2 percent over last October. For context, the US is running HOT HOT HOT.

If you are a regular reader of this newsletter, you are not surprised. We’ve been expecting this. Why?

You may think it’s because of COVID or supply chain issues, but the real reason is something called monetary debasement.

Debasement happens when the value of a currency is lowered. It means the currency is worth less. How does that happen? 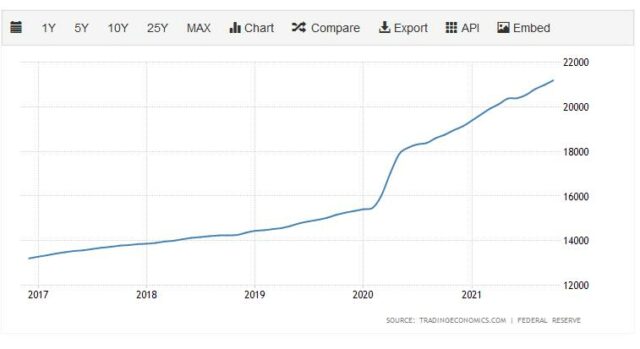 According to the Wall Street Journal, between December 2019 and August 2021, the US increased the money supply by $5.5 trillion. That’s a 36 percent increase in just 18 months. More than one-third of the total dollars in existence were created (out of thin air) inside two year’s time (see chart above).

One of the key values of money is scarcity. When a currency becomes less scarce, it’s worth less.

Okay…so…six percent inflation rate. The Federal Reserve just came out and said that this is not temporary, even though previously they did. Plus, it’s not really six percent. It’s something much higher…probably more than 10 percent.

If you have your money in cash, and it’s just sitting in a checking or savings account, your 100 dollars will have 90 dollars of buying power in 12 months.

If you have any investments (stocks or bonds), they need to make about 10 percent just to keep up with inflation. Stocks could keep up, but bonds definitely cannot. The current rate of the US 10-year bond is 1.5 percent. Using the smaller six percent inflation number, bonds are losing more than four percent per year.

Let’s take this a step further.

Let’s say the average portfolio has about 40 percent in bonds. Smart investors, including large pension and hedge funds, are going to have to go further out on the risk curve to make up for inflation. That means they are moving out of bonds. But to where?

More stocks? They can’t have too much stock exposure.

Junk bonds with high yield? That’s a lot of risk.

Gold? Gold has had a negative overall return since 1980.

Annuities? Investment planners will make up all kinds of crazy financial instruments to stay in the game.

I AM biased on this point, but my common sense tells me that much of the money leaving bonds and out of cash will go into Bitcoin. Now a $1 trillion dollar asset, Bitcoin is big enough for family offices to invest in (some have a minimum of $1 trillion in asset value in which they can invest).

It’s also the only financial instrument with predictable inflation (1.77 percent) and a math-based capped monetary policy (will never have more than 21 million…ever).

I am not a financial analyst and please don’t take this as financial advice. I’m only trying to use common sense. Two percent in every portfolio should be table stakes at this moment in time (again, not financial advice).

Oh…and currently, people of the world are adopting Bitcoin at a faster rate than the Internet or the mobile phone. At this rate, Bitcoin will reach one billion users by 2025.

Okay…this is for the geeks out there. Want to know how DisneyWorld has evolved their strategy about dealing with long lines and wait times over the years? Here’s an amazing video that takes you step-by-step from the beginning through to FastPass.

Join thousands of smart people who get Joe’s Newsletter.

Join thousands of smart people who get Joe’s Newsletter.