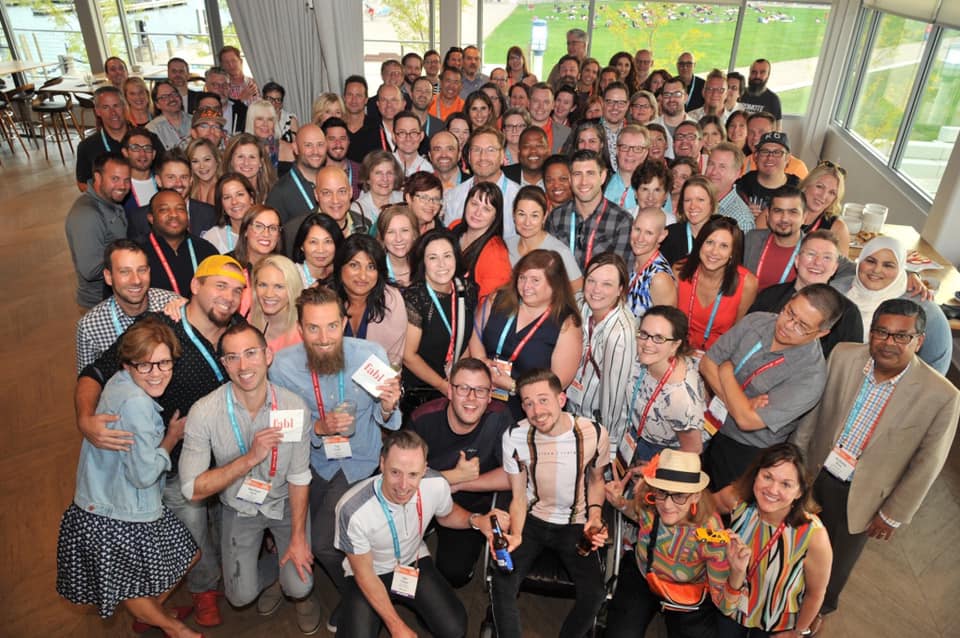 Last week was the 9th Annual Content Marketing World, held again in my home city Cleveland, Ohio. It’s hard not to get nostalgic about the event. Almost 4,000 attend this event every year, coming from well over 60 different countries (as well as every state this year except Alaska). It is now the largest annual business event in Cleveland, bringing approximately $4 million dollars into the city each and every year (according to Destination Cleveland).

Today, for some reason, I asked myself “how did this happen?”

I mean, I know how it happened. I remember the plan. Hired the right people and contractors. A truly amazing team. I also remember how we never thought people would actually come to Cleveland for a business event (We reserved a room that fit 150 people in 2011. 660 showed up and we took over the hotel.).

But more specifically, what were the events that led to the creation of Content Marketing World, inarguably the most successful thing I’ve launched in my entrepreneurial career?

It took a few minutes…but then it became clear. The answer is attending marketing and other industry events. Yes…it’s that simple.

In 2009 I was sitting at an American Business Media event. While watching a presentation from Peter Hoyt, I came up with the idea for Content Marketing Institute (CMI).

Later that year, I presented at a Web Content event in Chicago hosted by Scott Abel. I spoke on this concept called content marketing. Two speakers after me, a gentleman named Robert Rose spoke about the same concept. Robert and I talked afterword and immediately became friends. In 2010, he took over CMI’s consulting practice and now hosts Content Marketing World. We’ve written two books together, most recently Killing Marketing, and still have loads of fun with our podcast, This Old Marketing.

In early 2010 I attended a Custom Publishing Council meeting in Florida. There was one person who asked multiple questions to every (and I mean every) presenter. That person was Andrew Davis. He went on to speak at every Content Marketing World, keynoting twice (btw, I met David Meerman Scott at the same event, the CMW keynote our inaugural year).

A few months later I attended Web Content Chicago again and met Kristina Halvorson. Kristina, a future Content Marketing World keynote, helped me shape the idea of content marketing. Kristina doesn’t know this, but I owe her an incredible amount in challenging me to think deeper about the practice area.

Later that year, I attended my first MarketingProfs event, and made it a point to meet Ann Handley. Ann, the queen of content marketing, became another CMW keynoter and nine-time speaker. At the same event a few years later, I watched Tamsen Webster speak (2019 CMW Keynote).

One key moment came at Content Marketing World 2012, when an enthusiastic Andy Crestodina came running up to me, book in hand, asking me if I would read his book (it was spiral bound and printed on a home computer). I still have it today. By the way, Content Chemistry is now in its fourth edition. Andy later became a CMW keynote speaker and is almost always among CMW’s most popular speakers.

Pam Didner. I met her at an event in Colorado.

Carlos Abler and Buddy Scalera. Met them both at Intelligent Content Conference (which CMI later purchased).

Scott Stratten. Met him at a DMA event in Las Vegas (2019 CMW Keynote).

Jessica Best. Met her at an event in Kansas City.

I would go on but I’d probably lose you. The point is, without going to and being active at events, there would be no CMI or CMW…and you certainly wouldn’t be subscribed to this newsletter.

Meeting people and building relationships through in-person events will take your career to the next level, whether you’re in marketing, retail or a stay-at-home dad. I cannot stress how important this is.

And there was a method to the madness…a strategy for attending events.

Here are a few tips.

1. Every October I make a list of upcoming industry events and choose the ones I absolutely must attend.

2. From the chosen ones, I select a minimum of three speakers of which to meet and start building a relationship. While most people approach speakers after they talk (generally very crowded), I approach speakers before they go on stage (they are usually bored and just waiting to go on stage).

3. Tweet or share at least one valuable item from the speaker you are trying to build a relationship with (believe me, they notice).

4. When attending a session, I make it a point to introduce myself to at least one person in the audience. Most people attend events by themselves, so it’s never seen as weird to do this.

Hey, guess what? It’s nearly October. Time to get to work on what events you are going to attend in 2020.