First off, a disclaimer.

I produced this newsletter a week ago before I headed out to Creator Economy Expo in Phoenix. If my timing seems a bit off (depending on what happened in the world), now you know. 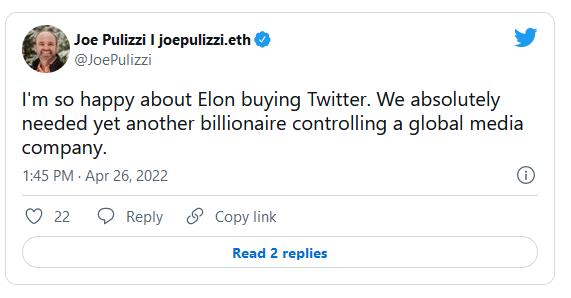 I woke up last Tuesday to Elon Musk buying Twitter.

First off, I truly didn’t think it would happen. I said for weeks on This Old Marketing that someone else, not Elon, would buy Twitter. I figured some big hedge fund or VC would come to the table and purchase the social media company, and I really believed that Elon just wanted the attention. Anyway, the deal is expected to close in October.

I keep learning that one of the things I’m best at is getting things wrong.

I think my youngest child said it best – “Nothing like our billionaire overlords controlling one of the main platforms of speech.”

“I’m so happy about Elon buying Twitter. We absolutely needed yet another billionaire controlling a global media company.”

Over the past two years I’ve been praising the benefits of Web3 as a possible new decentralized internet …one that gives control back to the users…that doesn’t lend itself to power residing with just a few.

If global media had an owner persona, it would be a white billionaire. And almost exclusively male.

Unfortunately, this trend will continue. I would assume most billionaires are smart people who know how to make money and influence people. How do you influence large groups of people? Not through advertising. You do so by building or buying audiences.

So many were cheering on Elon to buy and save the Twitter business model. Right now those people need to be very careful what they wished for. Twitter has 217 million active users. Twitter has become, perhaps, the most important source of news for the world. And soon, it will be owned by the richest person in the world. How can one feel good about that?

Not to be a downer, but Tesla’s stocked dropped over 10 percent on the news. Why? Shareholders are concerned that Elon won’t be as focused on his core business now that he has a new side project. That might say it all. Twitter is a side project, a toy, for a billionaire.

Final thought – what if Elon really bought Twitter so they could never kick him off the platform? He has 86 million followers on Twitter…so…he paid about $500 per follower so he could stay on the platform.

If you haven’t listened to my April 25th podcast on advertising, please take five minutes and listen to it here.

For many years I’ve been talking up the idea of paid subscriptions as a model that content entrepreneurs needed to aggressively consider. Paid newsletters, paid memberships, paid training, etc.

But even before the fatal collapse of CNN+ (if you could even call it that), I’ve been feeling the shifting sands of consumer behavior. For me, it seemed,  sometime in 2021 most consumers hit their limit of paid subscriptions.

Media company Axios suggested that US consumers have a limit of about four services at a time for about $10 per ($40 total). It really doesn’t matter. The point is that most people are exhausted with paid subscriptions. Pay walls, pay gates, article limits, view limits, enough already.

At the same time, company coffers are full. And they are in full spend mode, even though many are calling for a major economic slowdown. Corporations are spending on advertising for podcasts, for newsletters, for sponsored influencer programs, etc. You name it, they are buying.

I don’t see this as a short-term trend. This will continue to grow. And large companies are starting to become more comfortable supporting small creators.

So while so many of my peers are going the paid route, you’ll see that we are going the opposite direction with The Tilt. Just to note, I do believe in paid subscriptions as a valuable model, but it just seems that most everyone was going in that direction at once. And when everyone is zigging…

And a final thought…Morning Brew is all the rage today…their product, their growth. An advertising model made this possible. Now watch as they diversify into paid programs (like live events) to protect themselves when advertising is not as bright and shiny in a few years.

GenZ’s New App (and not mine)

A few weeks ago I found out about this new app for the younger folk called BeReal. It went from pretty much nothing last year to over 2 million app downloads in March alone. It was one of the top five app downloads (of all apps) in the first quarter.

Here’s how it works. Once you set it up and find your friends, BeReal will message you saying it’s time to post. It does this once a day at random. You have no idea when it’s going to ping you. Then it takes a picture of you and where you are at, wherever you are, and only sends it to your direct connections. You don’t have to do it “as it happens” but if you don’t your connections will know.

Get it? Be Real? It’s supposed to be social media that isn’t staged and gets you to post “in the moment.”

I liked the idea. It’s definitely different. Although, what if someone is in school or crossing the street? All hell could break loose. But I digress.

So as the marketing person I’m supposed to be I downloaded to app to see what’s what. Upon signing up it goes through all your contacts to see who’s using the app. Guess what? Only one person (the daughter of one of my friends) was on the app. One? Are you kidding me?

I felt old. And then deleted the app.